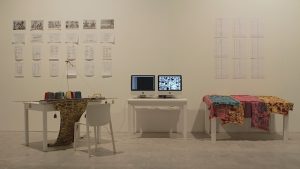 Art-educational project “Education and creative experiment” – is an attempt of interaction with the environment of modern academic education, creation of interdisciplinary place for communication between contemporary art and traditional art education, and also between contemporary art and far from art spheres like science and education. Particularity of contemporary art is that it comes beyond the frames of expositional practice and becomes an instrument for solving specific problems and or peculiar interdisciplinary place which helps to generate ideas. This was the main theme of each component of the project organized in four institutes of Lviv. Exhibitions and integrated art works raise the questions of basic categories of each educational institution to realize this aim.
In particular:
Lviv National Academy of Arts. There are represented works in one of the elder specialization of the academy – textile art and are shown its creative possibilities by means of new instruments. A painter form Ukraine and artists from Greece show audio visual installations.
Lviv Mykola Lysenko National Music Academy and Faculty of Culture and Arts of Lviv National Ivan Franko University – Audio visual art works reveal such category as the sound. Students and teachers of the university can see works of Ukrainian and Polish artists.
Danylo Halytsky Lviv National Medical University. The integrative objects raise the problem of a human being and molecular structures.
Lviv Polytechnic National University. In this place artists work with the theme of mechanics, engineering or IT. Works of artists from Ukraine, Poland and France are shown.
Realization of the project “Education and creative experiment” may become an impulse that will help to reveal a creative potential of spheres outside art, to show possible ways of cooperation between creative imagine and new technologies in engineering, medicine and so on.
For students and teachers of Lviv National Academy of Art this project will demonstrate a creative potential of new media, help to overcome technophobia and prejudice to new art practices and to contemporary art in general.
Art works: “Noise form”, audiovisual installation (Tereza Barabash UA, Ostap Manulyak UA), “Color studies_RGB”, interactive object (Mykhaylo Barabash UA), “Oiko-nomic Threads”, interactive system, 2014 (Marinos Koutsomichalis GR, Afroditi Psarra GR and Maria Varela GR)

For the community of Danylo Halytsky Lviv National Medical University the exposition of art could illustrate a creative potential of applied research of human body, reveal their esthetic side and also to show how an experience of human physical existence may be transformed into esthetic experience by means of IT.
Art works: “MICROSCAPE”, multichannel video projection S-3D (Joanna Hoffmann/-Dietrich PL), “Wounded”, video object (Vitalii Shupliak UA)

Expected feedback of these events could be further initiatives of these communities of creating common interdisciplinary projects.
By our project we strive to make a specific gesture of “depressurization” of these scientific and art communities by mediation of contemporary art.

The exhibition “Metoda” in Dzyga Gallery will become the important part of the project. It will be the exhibition of curators group of Open Archive of Ukrainian media art, that will represent the results of investigation a cradle of creative group akuvido and influence on it of Alfred Maksumenko’s, professor of Lviv academy of Arts. The project “Metoda” is a result of investigation of their early works and pedagogical method of prof. Maksymenko, who influenced not only the akuvido group but many other Lviv media artists. It is also an attempt to tell about creative beginning of this group, which successfully enter the European context of new media development, but stayed little-known in Ukraine.

Problems:
Questions of methodology of education and educational reforms rise very sharp in Ukraine. Unfortunately, there are no certain changes in this way. The greatest part of talented youth strives to move abroad. Our educational system lags behind European. Maybe it’s because of lack of cadre or technical possibilities, but the most evident reason is remaining of old soviet system. Educational programs are adjusted to economics of knowledge not economics of thinking. 90% of educational process is limited to remembering of terms, dates, theorems, concepts so on. Thus in the most developed educational practices of the world the emphasis is put on imagine, creation and thinking. So the traditional education stays hermetical. This situation leads to archaisation and marginalization of Ukrainian educational system, approval of conservative post totalitarian academicism and loss of motivation to study in this schools in representatives of new generation. That’s why the popularization of new media, including them into a context of art educational institutions is one of the main goals of the project.

Concerning to art education we can see very active and growing interest to new media. New Media is a gathering name of branches of contemporary art, which use IT such as Computer Graphics, animation, virtual reality, video, robotics and bio technologies. Objects of media art are often interactive and provide spectator’s action. (*Wikipedia) Many young artists make experiments in this field. At the same time there are no even departments or disciplines devoted to this field in any of national Ukrainian high schools or universities. This situation is very paradoxical. The greatest part of artists studies traditional art forms and technics, but refuses from them in future, and masters a new art language and means of contemporary art only by themselves.

The Festival is being implemented with the support of the National Exchange Program funded by the European Union and the National Fund for Democracy Support.